I’ve been working on a Mobile App that I am hoping to release to the App stores shortly. One of the things I really wanted to get right from the beginning was Marketing. By training, I am a developer but I have picked up some Marketing skills along the way. One of the biggest mistakes people make with Mobile Apps, or any product for that matter, is not thinking about marketing from the beginning.

There are formulas you can use to estimate search and download volume. Fortunately, there are some folks who have done all of the work for you. I researched some different ASO tools and the one I will review in this post is one called Sensor Tower.

My purpose for using Sensor Tower was twofold, the first was to see if there was enough searches to make developing my app worth the cost. The second was to see which low competition, high traffic keywords I could rank for. A nice side-effect was that I could see other relevant keywords that I didn’t think of.

The first thing I will note about Sensor Tower is that I thought the User Interface was really clean and well organized. I didn’t really get stuck anywhere nor did I have to look up any tutorials or videos. I was able to jump right in and start using it. One thing I liked, which is a nitpick, was that when you click on an App that appears in the list of Apps that are ranking for a keyword, it opens in a new window. This is nice since I found that I had six or seven on the go and didn’t have to click the back button all of the time. 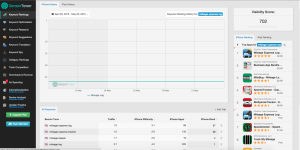 My one caveat with Sensor Tower was related to their Android rankings for keywords. The competition for any keyword was very high. I might have missed it, but I was unclear as to what their sources were, meaning do they just use Google Play or do they also include the Amazon App Store and the others that exist for Android?

My one critique didn’t make the tool any less useful and I still gained a lot of insight using Sensor Tower for the ASO process. The biggest thing I learned is that, aside from keywords being huge in your marketing success, there are lots of low-competition and high-traffic keywords that I can rank for. The process overall gave me a deeper appreciation for marketing and promotion.